Hear Their Stories. See the Impact.

More than 350 patients have received life-saving transplants through support from the Illinois Transplant Fund. As you will learn from these patient experiences, organ transplants not only saved their lives, but positively impacts families and communities. 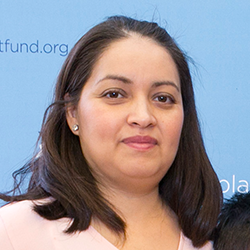 Berenice
36
Before the transplant, my life revolved around dialysis. Every day I was connected to a machine. My four-year-old son was almost entirely under my husband’s care in the evenings. I was not able to take care of my son by myself, much less keep a job or make long-term plans.

After four years, my kidneys had nearly lost all function. When we were informed that I needed an organ transplant, many of my relatives wanted to donate but were not compatible matches. My husband was also tested and he turned out to be a match. One of the requirements to obtain a transplant was having reliable medical insurance. I will never forget the day I received a call from the Illinois Transplant Fund and learned I was eligible to receive financial support for monthly health insurance premiums.

After the transplant, I had the energy to take care of my child and participate in his activities. I now fully believe that I will be able to see my son grow into a man and that my husband and I will grow old together. The ITF saved my life and provided my family the opportunity to be happy again. 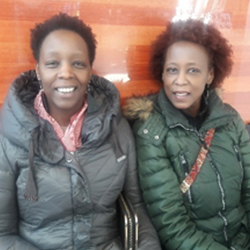 Jacinta & Florence
A TALE OF TWO KIDNEYS
Most 13-year-olds are preoccupied with celebrating milestone events such as officially becoming teenagers and starting high school. But Jacinta Kimondo’s teen years were wrought with different kinds of milestones, all of which revolved around a life-threatening illness and medical needs. Jacinta experienced kidney failure at age 12, started dialysis treatments not long after her 13th birthday and received her first kidney transplant when she was 14.

“I don’t clearly recall the exact symptoms I experienced as a young girl that led to my kidney failure,” said Jacinta. “But I do remember my family protecting and supporting me throughout the ordeal.”

Jacinta’s new transplanted kidney kept her healthy and alive for 26 years. But in her 40s, severe health issues became the focal point of her life once again. Fibroids in her uterus caused several complications, and that health problem was compounded when her transplanted kidney began to fail.

“Because I had multiple health issues, I felt extremely weak,” said Jacinta. “I was getting tests and blood transfusions two to three times a week. I had trouble walking and felt increasingly debilitated, and the exhaustion was affecting my job and time spent with my loved ones.”

Jacinta leaned into her reality with strength and positivity and did not give her sickness any power. This time around, however, two, not one, completely different life-threatening health issues challenged her. Her doctors explained that she could not begin dialysis treatment until the fibroids were removed. Heeding their advice, Jacinta underwent a hysterectomy. Soon after that, she began dialysis treatment, which lasted approximately six years.

“I wasn’t surprised that the kidney I received when I was 14 began to fail,” said Jacinta. “I knew the day might come when it would stop working. But I was OK with dialysis. At that point I was not actively planning on getting another transplant. I was on regular hemodialysis for a couple of years and then started peritoneal dialysis treatment at home, which I was comfortable with.”

But Jacinta’s twin sister, Florence, had different plans in mind. She began researching the possibility of a second kidney transplant for her sister. She discovered that, in Illinois, Medicaid covers dialysis treatment but not organ transplants, so Florence suggested raising money and traveling abroad for the transplant. However, Jacinta was becoming increasingly weak and her doctors advised against it. A second option was to be listed on the national organ transplant waiting list. However, to be listed, patients must provide proof of access to post-transplant medications needed to maintain their transplanted organs and sustain their lives. These vital medications are available only through full health insurance coverage, which Jacinta did not have. This dramatically decreased her chance of receiving an organ transplant. It seemed the sisters had reached an insurmountable obstacle.

But these challenges did not deter Florence from calling different Chicagoland area hospitals in search of a solution. Jacinta joined her sister on her search, and eventually their persistent investigation led them to University of Illinois Hospital & Health Sciences System where they learned more about the Illinois Transplant Fund and inquired about Jacinta’s eligibility for the program. Jacinta applied and discovered she met the program’s eligibility requirements, and the sisters’ three-year search for a lifesaving solution came to an end. With the support of the ITF, Florence was able to donate one of her kidneys to her sister on Dec. 28, 2014.

“It was a huge change undergoing dialysis for seven years then not at all,” Jacinta said. “I know it’s [the transplant] not permanent, but now I can spend time with my family without the pressure of knowing that I have to run back and get on the dialysis machine.”

Life is a lot more normal now for Jacinta, who is currently working as a nursing assistant and is once again enjoying being active and relishing the simple things in life like reading, walking, watching movies and going out to new restaurants with family and friends.

“I know how hard it is to remain strong and positive, but I would encourage others to not lose hope,” said Jacinta. “Don’t allow illnesses to control your life. You are in charge, and you make the rules and if you search for solutions. Eventually, there will be someone willing to help. The ITF truly saved my life, and I am so grateful to them and to my sister Florence for this precious gift.” 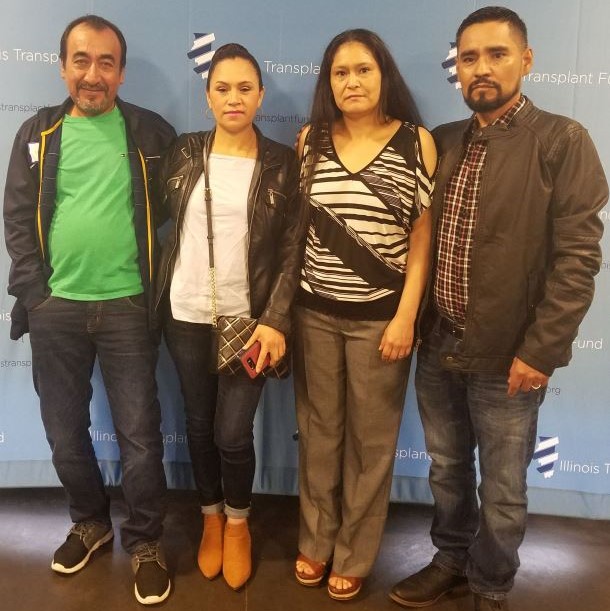 Vicente and Aracely & Cristina and Luis
Generosity and Courage of Two Wives Save Husbands’ Lives
The friendship between two married couples — Cristina and Luis and Aracely and Vicente — is a likely one. After all, they have a few things in common. Both couples are of Mexican descent, they’re relatively close in age and both have children. It’s the circumstances of how they came to form their special bond that is unlikely.

In 2016, weight loss and facial sun spots — symptoms attributed to an outdoor job — prompted Luis to seek medical treatment. The diagnosis, however, revealed a much more serious condition: Luis’ kidneys were failing.
“I had no idea anything was wrong with me,” Luis said. “And definitely nothing that serious. Unfortunately, we don’t go to our annual doctor visits; we only go when we’re feeling extremely sick.”

A short time after his diagnosis, Luis began receiving dialysis treatment three times a week at Fresenius Kidney Care in Berwyn, Ill. During this time, he had to stop working due to the severe side effects of the treatment. With the financial support of Luis’ and Cristina’s families, Luis was able to focus on his treatment and search for a long-term solution.

That same year, Vicente lost consciousness while working at his landscaping job. When he came to, he sat on the curb for about 15 minutes unable to understand what was happening to him. Shortly after his episode, Vicente was diagnosed with kidney failure.

“It felt like someone pulled the switch on me. There was a picture, and all of a sudden the screen went black,” said Vicente.

In retrospect, Vicente and his wife recall one of the subtle symptoms that led up to his kidney failure diagnosis.

“He’d complain that food and drink didn’t taste good,” Aracely said. “I thought that was strange because the recipes and dishes were the same, but his appetite changed drastically, and during that time he lost a lot of weight. He said everything tasted metallic. Now we know it was due to his kidneys failing, not my ‘bad’ cooking,” Aracely joked.

The same day of his diagnosis, doctors informed Vicente that he would need an organ transplant to continue living. In the meantime, Vicente received dialysis treatment at Westlake Hospital in Melrose Park, Ill., for a year.
“Before my illness, I was extremely active,” said Vicente. “I’d get home from work and play sports with my son or take him to karate classes or help him train. All of this stopped suddenly when I became ill.”

The almost simultaneous search for lifesaving solutions led both Luis and Vicente to University of Illinois at Chicago where they both received information about and submitted applications for the Illinois Transplant Fund. Both met the program criteria, and both were added to the transplant waiting list.

“Filling out the ITF paperwork at the hospital was simple and fast,” said Luis. “The hospital staff members at UIC were very helpful, and we received the good news in the mail after about three weeks.”

When asked if a family member or friend would be willing to donate to Luis or Vicente, both of their wives volunteered to become living donors for their respective husbands. Unfortunately, although Aracely was a match to her husband Vicente, Cristina was not compatible with Luis.

Hospital coordinators offered Luis and Cristina an alternate option — a paired donation — the process through which a living donor donates a kidney to a stranger so that a friend or loved one can receive a kidney from a compatible donor in return.

“We thought it was a great option,” Luis said. “But I remember thinking the difficult part would be finding someone who was a match to me and who would be willing to do the ‘pairing,’ as they called it.”

After three attempts to find a compatible pairing, hope began to dwindle for Luis and Cristina. On the fourth attempt, they tempered their hopes, but, after a year of waiting, Luis and Cristina received the call they’d been waiting for. There was finally a compatible donor willing to do a paired donation.
The donor? Aracely.

Aracely had also volunteered to be a living donor for her husband and, after testing, they were informed they were a match. However, they were also presented with an alternate scenario — the opportunity to help save another life through a paired donation.

“We discussed it and decided that a paired donation was the best decision and the right thing to do,” Aracely said. “That way, two people would go off dialysis — not just one — and two people’s lives would be saved— not just one.”
In January 2017, on the day of the kidney transplants, Aracely and Vicente and Cristina and Luis found themselves in the same hospital room but were told not to speak to the other couple to avoid any confusion. But, they could all hear the doctors and nursing staff ask questions and share information back and forth and figured out they were the other couple’s paired donors.
Both transplants were successful. Within three months, everyone had completely healed from their surgeries, and the couples’ unique bond and friendship was cemented.

“’Relief’ is the word that best describes how I feel,” Luis said. “After having been on dialysis and unsure of my future for so long, I’m able to live a much more normal life. Aracely and Vicente and the help of the ITF made that possible.”

“For us, it was a long road, but it was a blessing to finally find out about the ITF and how they could help,” said Vicente. “Knowing that I’ll be around for a while longer makes me feel grateful to the organization because it’s giving us the help we need, when we need it most.”